Corralitos >> Hurtling toward earth at 120 miles per hour in a freefall from an airplane is Mark Knutson’s idea of heaven.

“In that time and space, you can only think about one thing, and that’s: Wow! Right now! This time frame brings out who you are and what the air has to give.”

“Taking Cameron Diaz on a tandem jump during ‘Charlie’s Angels’ filming was off the charts,” Knutson laughed.

The Corralitos resident and skydiving pro is philosophical about life and death.

He’s been on the site of three fatalities during group attempts to set world records.

“It’s dangerous. But for me, it’s a circle. I do this because it’s so charging with the good stuff. I love my life and what I do. I don’t give it a second thought. I might die doing what I love, but what I can do? At least it’s immediate — game over.”

Knutson started flying at 16, and by 18, was hooked on jumping. He used his mom’s sewing machines to make jumpsuits for other skydivers. In 1992, he had his own Oregon-based company, Stunts Adventure Equipment.

Last April, in Arizona, Knutson set out to break another world record, in a jump with 222 skydivers, all part of the World Team, a highly accomplished international skydiving team comprised of world-class athletes, professional camera flyers and skilled pilots.

What makes him proud? “I’ve lived and experienced life on my own terms, done things that other people dream about doing,” said Knutson. “I’ve rampaged this planet like few people have, especially in the skies.”

Born: St. Paul, Minnesota, but has also lived in Wisconsin, New Jersey, Florida and Oregon. Moved to Santa Cruz in 1995.

Crazy stuff: ‘When I started skydiving, there were no automatic life-saving devices. There were no Go Pro cameras. I did it for the love of adrenaline, not for fame and fortune, it was just a giggle.’

Privacy: ‘I’m actually a very private person. I don’t have a webpage. I don’t need to be the center of attention when I am in air doing what I love. It’s not for spectators or journalists. I land, pack up and leave.’

Book: ‘I’m in the process of writing a book. It’s an arduous process. I have a huge part of the sport’s history in pictures, videos and equipment.’

Hollywood: ‘I do stunts in the movies or stunt rigging. My specialty is designing hidden parachute systems under wardrobe. In “Iron Man” someone looks like they are in a freefall but they are actually wearing specially designed and built parachutes, usually in the small of the back. I helped with 13 hidden parachutes. All these guys’ lives are in our hands.’ 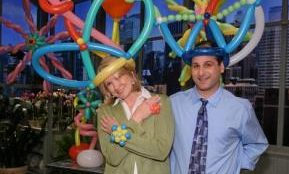